Home  »  Disneyland  »  How America Sings Came to be

Once Walt Disney World in Florida opened  attention was focused on the new Florida park, and General Electric felt the ‘Progress Story” had been well told in California and wanted the popular Carousel of Progress attraction to be moved to Disney’s newest magic Kingdom.  With that move Disneyland would soon be left with a large EMPTY high guest capacity theater in Tomorrowland. During the late 60’s and early 70’s famed Imagineer Marc Davis developed dozens and dozens of possible audio animatronic based shows -and one that was loosely considered was a barn in Frontierland where musically talented animals would perform old time America favorite songs. This seems to be a combination of the proposed Ford “Cruise-O-Magic” Theater were animals would sing the benefits of Ford automobiles, as well as a distillation of Country Bear Jubilee which eventually became the Country Bear Jamboree. 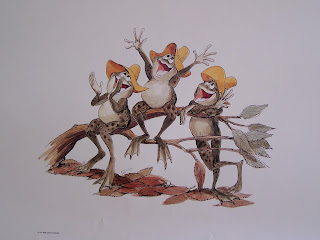 These frogs would soon be “heading’ South”
Much of  Marc Davis’ earliest work for the Frontierland Barn show featured mostly farm/ American West type animals –mostly in country and Old West clothing, but  very simple garb–a hat or a vest–maybe some overalls or a simple bonnet keeping the animals far more animal and less humanesque.
When the Carousel Theater became a future option, Marc Davis and Al Bertino took the “Animal Barn” show and began to fit it in to the multiple act theater format of the “Carousel of Progress” giving  it the working name “Carousel of Song”. Disneyland and WED also knew of the pending American Bicentennial and wanted to tie that theme into the show resulting in the shows official hosts: Sam The Eagle & his sidekick Ollie The Owl. Disneyland wanted to be sure guest knew of it’s patriotic theme and the “Carousel of Song” became “AMERICA SINGS” 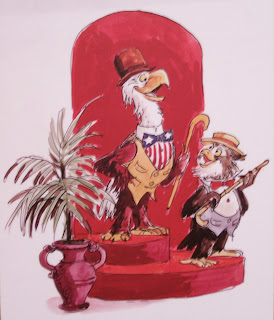 Marc Davis and Al Bertino selected all the songs for the show –they listen to a lot of music and since neither could read music they hired a piano player who couldn’t sing! Marc Davis said : “Al wasn’t much help on that. he’s an Italian –the only one who can’t sing a tune!” They chose popular songs people  know –and stayed away from songs that dealt with war, but always looked to see if a gag or laugh could be brought out in the selected song.  The America Sings show came together in about two years. 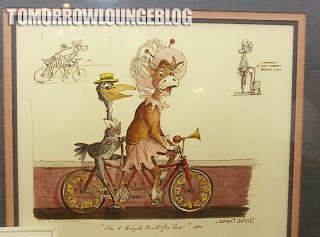 This unused concept for the song “Bicycle Built for Two”
This was one of many ORIGINAL WED concept pieces the Disney Gallery SOLD in the late 80’s!! 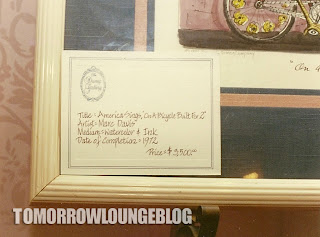 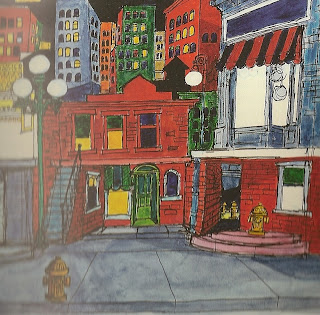 Marc’s concepts are sculpted into reality 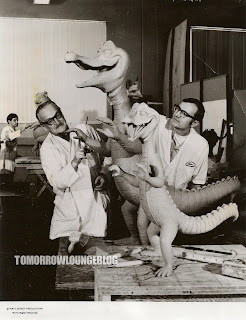 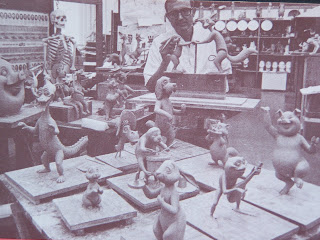 And………..if you thought the second level of the Carousel Theater was going to be neglected–you are very wrong! WED was considering several things for the top of America Sings including a Bicentennial exhibit, a restaurant and the UFO SHOW!!! 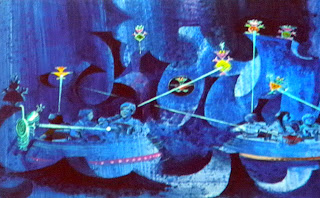 THE UFO SHOW TOMORROWLAND
OPENING 1975
DISNEYLAND
The UFO SHOW (the working name) was described by WED as in 1974 as: “a little something planned for upstairs of “America Sings” Here guests will travel in cars on direction, armed with air guns, while eerie, unhuman, gremlin-like targets pop up and dart the other direction. Upon completion the attraction will be the first “shooting Gallery” where the marksman’s position moves as well as the target’s
hmmmmmm 30 years before Buzz Lightyears Astro Blasters!!!

David Oneal is an Emmy award winning video editor and producer. Highlights of his career include post production on many network shows such as “ Friends”, Walker Texas Ranger” and Sabrina the Teenage witch. David has done numerous national television commercials for Ford, Jaguar, and many national franchises. David’s other cable television work includes, “UFO” Hunters on the History Channel, and "American Gangster" for BET. David has done music video work for Disney, Columbia Records, and Jive Entertainment David also hosted his own nationally televised automotive show, and travel shows, he produced and directed over 80 documentaries and special events on Disneyland and other theme parks, and is the host of a weekly show called That Drone Show. He is also the book author of Anaheim Vacationland a book about Anaheim, as well as the author of more than a dozen books on tech through his ten minute master series.